From a little girl, just one Christmas wish.

It’s Christmas. Not at home in Manila. But 1,600 miles away in Seoul, Korea. And 3-year-old Georgia Halliwell-Paget has just one wish for Santa.

“She wants her owie to go away,” said her dad, Nick. “We told her it won’t happen this Christmas. But hopefully, next Christmas.”

Diagnosed with an aggressive tumor on her lower spine days after her birthday in June, Georgia is receiving proton beam treatments at Korea’s National Cancer Center (NCC) and undergoing chemotherapy across town at Severance Hospital.

Ordinarily, Nick and his wife, Becca, would have traveled to the United Kingdom for the holidays, their two kids in tow, to celebrate with their extended families. “This year is going to be a different Christmas from any other Christmas we have experienced,” Nick said, as a tall Christmas tree sparkles nearby.

It’s not just the setting. Or the circumstance. For Becca and Nick, this Christmas is special due to the immense generosity of people — many of them strangers — who have made Georgia’s cancer care possible.

And then there’s little Georgia, “this little beautiful spark of life,” as Becca described her on The Helping Georgia Fund website.

“As parents, we can’t explain how lucky we are in terms of her temperament,” Nick said. “Georgia is not really phased by any of this. She understands she’s doing this to get rid of the owie that’s inside of her. And she said, ‘When my owie is gone I will start school.’

“We get so many comments about what an inspiration she is,” Nick continued. “We have a weekly meeting with Dr. Joo Young Kim. And we showed her a video of Georgia dancing around to Christmas music — after 20 proton treatments.”

When they first diagnosed Georgia with a rare Ewing’s sarcoma, physicians at St. Luke’s Medical Center in the Philippines predicted a 20 percent chance of survival. An intense regimen of chemotherapy and experimental P53 gene therapy combined to help reduce the tumor by 70 percent. Locked to the spinal column, the remaining tumor could not be surgically removed. So Georgia’s doctors considered several types of radiation treatments before Becca and Nick suggested they consider proton beam therapy.

Becca and Nick had conducted their own research online. “But it is proton sic,” Becca wrote on October 24. “It does not have an exit dose, from all our research it still feels like it should be the number one choice. We have to get this right for G; we have to give her the best chance we can.”

NCC offered an opportunity. Becca and Nick had taught school in Korea seven years earlier. They had a network of friends there to turn to for support. And the cost of proton care would be workable, a fraction of the cost in other countries.

They reached out to NCC and shared Georgia’s health records. Evaluating Georgia’s medical progress over the summer, including the smaller-sized tumor and its sensitive location, the proton doctors at NCC figured her chances of survival would be 60 to 70 percent.

“We came to Korea in October for a look and see,” Nick recalled. “We flew in at 5 that morning and flew out at 8 that night. We were able to spend time with Dr. Kim to better understand how Georgia’s treatment would work.”

And Nick and Becca found a special pediatric ward at Severance Hospital where Georgia could continue her chemotherapy. “Basically, a 10 minute walk from where we are staying,” Nick said.

After a week of treatment planning, Georgia received her first dose of protons on November 19. Her final proton treatment will be on January 7. The family will return home to Manila for Georgia’s next round of chemotherapy on January 17.

“She’s developed some redness on her back,” Nick noted. “Apart from that, there’ve been few side effects. She gets a bit tired after her proton treatments. But within an hour and a half after treatment, she’s bouncing around again.”

Nick said the family is hopeful about Georgia’s health.

“If you let it get on top of you, you feel as though there’s no way out,” Nick said. “But with everyone’s support, we’re not walking the road alone. We’re on this journey with thousands of people.” 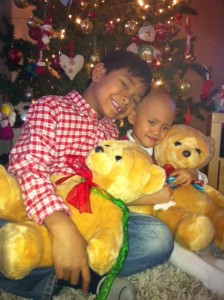 Three-year-old Georgia Halliwell-Paget and her big brother, AJ, are spending Christmas with their parents far from their tropical Manila home.