They arrive in Boston, Massachusetts, with apprehension and hope, from cities and small towns across the United States and Canada, Europe and Africa. And for the next two months, these families will call the high-rise apartment building at One Emerson Place “home.”

There on one floor, Christopher’s Haven provides seven furnished apartments — and unwavering emotional support — to families of kids being treated at nearby Francis H. Burr Proton Therapy Center, part of Massachusetts General Hospital (MGH). “Families come to Christopher’s Haven expecting a decent place to live,” says Martha Bernard Welsh, Executive Director of the nonprofit that has been providing housing for the past five years. “What they don’t expect is the environment of openness and support and care — from family to family. It is such a sanctuary for kids with cancer, for their parents and their siblings.” And the sanctuary is a kind of therapy, she says.  Families all know what one another are going through and quickly develop bonds of comfort and support. “They are in a common world,” Welsh says. “Conversations are funny and intense. People become incredible friends and those friendships last.”

Proton beam treatments of children with cancer typically take six to eight weeks. “You come to Boston from someplace in the world — Boston being a very expensive city — and you’re looking at a hospital discounted rate at the local Holiday Inn of $189 a night,” Welsh says. The prospect of spending $12,000 just on housing during a family’s eight-week stay can put parents in a very difficult spot. Some are considering conventional cancer care closer to home “or they’re thinking about selling everything to make it work,” she says. “Coming to Christopher’s Haven is simply a far better solution.” At Christopher’s Haven, families typically pay $30 per night, the generosity of donors underwriting the true housing costs. 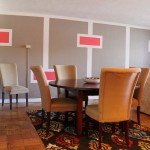 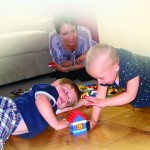 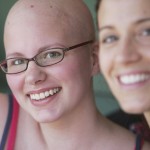 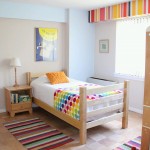 Living away from the comforts and normalcy of home is incredibly stressful on most families, Welsh says, to say nothing of the circumstances that have required the temporary move. “This is four times the duration of your typical vacation,” she says. “A couple of kids and adults in a hotel room for that long? Even the nicest hotel wears out its welcome.” The physicians, nurses and social work staff at MGH talk regularly with the staff at Christopher’s Haven to accommodate families who are traveling to Boston for pediatric proton treatments. “We don’t look at any family finances to assess ability to pay,” Welsh says, “the social worker has a sense of that. In the end, it comes down to the medical staff prioritizing who needs our community of support and should stay with us.” Other families will stay at the nearby Hope Lodge or Ronald McDonald House. At Christopher’s Haven, “families are free to live the way they do,” she says. “Furniture is moved around. Kitchens are completely rearranged. They are making their apartment their own. “The model of having an apartment with a key and a lock works,” Welsh adds. “Families need that normalcy. And they need caring friendships nearby to give them strength and comfort. And laughter.”

More than 8,400 participants have been or are being recruited from around the world for cancer studies involving proton therapy, according to the National Institutes of Health in Washington, D.C. The nearly 70 studies cover more than a dozen types of cancer. Two other clinical studies are collecting data from approximately 10,000 patients who have already been treated with proton therapy. These studies are being conducted to better understand later effects of proton treatments and to help predict particular patient risks. 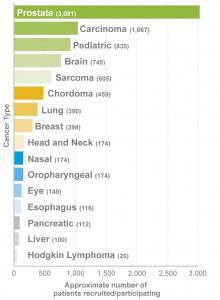 Next May, proton therapy professionals from around the world will gather in Seoul, South Korea, for the 51st Annual Meeting of the Particle Therapy Co-Operative Group (PTCOG). PTCOG is a group of professionals that is advancing proton, light ion and heavy charged particle radiotherapy.

Members meet annually to share the most current science of particle therapy and promote clinical understanding and collaboration. The theme of the 2012 conference is Innovative Applications of Particle Beam Therapy. The PTCOG 51 conference in Seoul, South Korea’s capital city, presents a unique opportunity for attendees to experience a city with both rich history and modern splendor.

Hosting PTCOG 51 will be Korea’s National Cancer Center (NCC) . Created by the National Cancer Center Act in 2000, NCC is a government-funded institution that strives to improve national health and welfare by reducing the incidence and mortality of cancer through advanced research and patient care. The Center has treated cancer with protons since 2007. NCC pursues its goal of conquering cancer with the same forward thinking that has made Seoul a global city. This commitment includes state-of-the-art facilities, which, in addition to proton beam therapy, include Tomotherapy® and robotic surgery. The center also boasts a robust research institute emphasizing translational research, which allows cancer discoveries to be more quickly applied to clinical practice. Areas of current research at NCC include a proton dosimetry study, a patient positioning verification study and a Monte Carlo dose distribution study. Specific clinical research includes a Phase I dose escalation study using proton beam therapy for recurrent chordomas, chondrosarcomas, and atypical or malignant meningiomas after previous radiotherapy; and a Phase II study of respiratory gated proton beam radiotherapy for inoperable pancreas carcinoma.

A prospective study would involve proton beam craniospinal radiotherapy in children with newly diagnosed medulloblastoma — assessment of acute and longterm sequelae and quality of life. Work at NCC has already helped improve the five-year cancer survival rate in Korea to nearly 60 percent, and has increased the cancer-screening rate to more than 56 percent of the population. For more information on the 51st Annual Meeting of PTCOG, visit www.ptcog51.com .

A year ago, the CDH Proton Center, a ProCure center located near Chicago in Warrenville, Illinois, treated its first patients, 24 months after construction began. The center has now welcomed its 100th patient.

The CDH Proton Center celebrated a milestone in July, completing treatment on its 100th patient since opening last October. “After the celebration, one of the patients said, ‘What are you going to do for the 200th patient?’” says James R. Williams, President, CDH Proton Center, A ProCure Center. “I hadn’t thought about it at that point, but I knew that milestone would come much more quickly than treating the first 100 patients. Less than three weeks later, we started treating our 200th patient.”

Located in Warrenville, Illinois, a Chicago suburb, the Center is the state’s first and only proton therapy facility. The Center represents a collaboration between Central DuPage Hospital, Radiation Oncology Consultants and ProCure Treatment Centers, Inc. Approximately 80 percent of patients treated at CDH Proton Center have come from Illinois, but they have also traveled from 16 other states, as well as from the United Kingdom, says Williams. “The patients we’ve treated, especially early on, knew a lot about proton therapy. Many were early adopters who had been waiting for the building to be finished.”

Currently, the Center is running five of eight treatment shifts, employing between 70 and 75 people. When full treatment capacity is reached, the Center expects to treat 1,500 patients annually and employ about 100 staff members. Types of cancers treated thus far include brain, central nervous system, head and neck, lung, gastrointestinal tract and prostate, as well as sarcomas and pediatric cancers. Patients treated at the Center who require adjunct therapy, such as chemotherapy or conventional x-ray radiation, can receive it at neighboring Central DuPage Hospital or at a facility closer to the patients’ homes. “The Center has raised the tide for all boats in the oncology market here,” says Williams. “For patients needing additional medical services, we can refer them to the other specialists needed to continue their treatment.”

In addition to providing exemplary clinical care, Williams says it is important to carry a positive patient experience into non-treatment hours. “Patients and families are going to be at a hotel longer than they’re going to actually be at the Center. We want to ensure the experience they have at the Center carries through to where they stay during their treatment. The local hotels have done a very good job, some putting families up in suites that have cooking areas, doing grocery shopping for the family and providing transportation. We have some great partners in the community that really embrace what we’re doing here,” he says. “Our staff is empowered by some of the most sophisticated technology and science currently available,” says Williams. “They’re incredibly excited about what they’re doing. They realize we’re changing the way cancer is being managed. That’s the beauty of it: We all know we’re making a difference.”

A full-size model of the system was displayed to showcase its unique structure and benefits. Proteus ONE is a single-room configuration consisting of an accelerator, a direct beam line and a compact gantry. It is a significantly smaller version of any current proton beam systems and operates similarly. When compared to IBA’s current single-room configuration with a cyclotron, a beam line and a two-story gantry, Proteus ONE will be about one-third the size.

The smaller footprint of Proteus ONE allows for correspondingly smaller facilities, reducing construction and maintenance costs. Because cost is often a barrier to implementing proton therapy, the lower cost associated with Proteus ONE will help make this technology available to more cancer care providers. The Proteus ONE design allows medical staff greater access to the patient than a traditional configuration. It also reduces the amount of time staff members need to position patients for optimal treatment, which helps reduce treatment times and patient stress.

Additional patient-centric elements are anticipated as IBA continues to work with its partner, Royal Philips Electronics, to integrate some of its Ambient Experience Design Solutions into Proteus ONE. “Patient comfort is an extremely important consideration for us,” says Nicolas Denef, Proteus ONE Product Manager, IBA.  “Receiving any type of cancer treatment can be overwhelming for a variety of reasons. We want patients to feel as comfortable as possible throughout the process.”

Bake sales, walks, runs, spaghetti dinners, raffles, auctions — all of these have been used by people to raise money to help support family members, friends and neighbors with cancer. In the U.K., two musicians are using their talents to help fund a young girl’s trip to the United States for Proton Therapy.

“Chasing Rainbows” is a song written by Jay Mya that has climbed the independent records charts in the U.K. The song, and a video featuring Mya and Jason Quainoo, is dedicated to Ebonie Webb, 3, who has a malignant brain tumor that has left her visually impaired. According to Ebonie’s website Ebonie underwent chemotherapy, and her cancer went into remission. Unfortunately, the cancer returned, and additional treatment has not been successful. Ebonie’s family would like to bring their daughter to the United States for proton therapy.

Writing the song and uploading the music video was done in a week, Mya writes on the video’s YouTube page. “We don’t have enough time for perfection. It’s all about getting little Ebonie the money she deserves ASAP.” All proceeds from “Chasing Rainbows” will go toward funding proton beam treatment for Ebonie in the United States. The song is available for download on iTunes®.